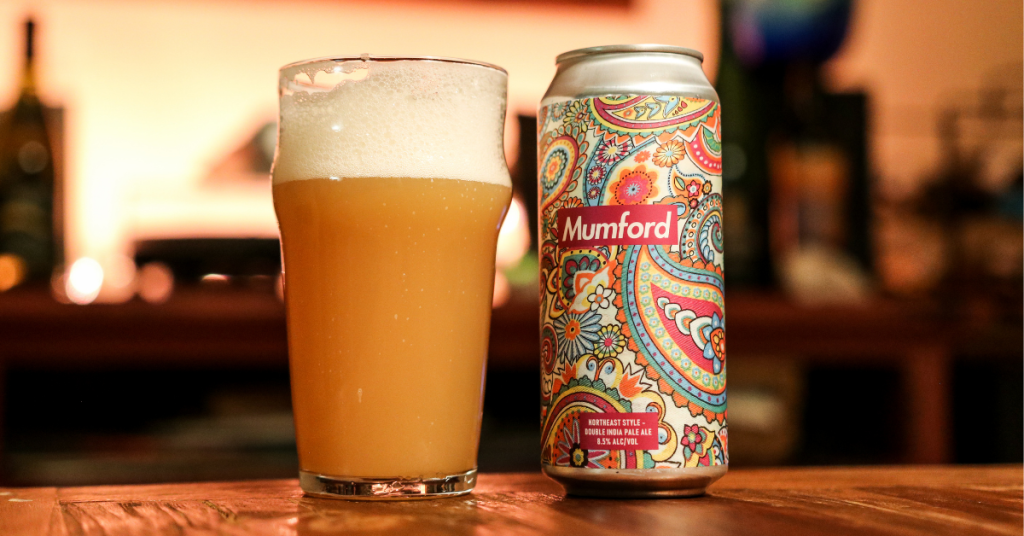 Ten years ago, outside of Vermont, there was one definition for an IPA. It should be intensely bitter. Piney. Resinous. Clear. Dank.

Those days are gone. Now, New England-style IPAs have come to dominate the craft beer scene. They’re a stark contrast to the more traditional bitter West Coast-style IPAs; these are fruity and hazy, maybe even juicy, and deeply aromatic.

Ask a brewer when they first decided to start making New England-style IPAs (New England IPAs), and chances are pretty good they’ll be able to tell you, probably to the day. Peter Mumford, owner and head brewer of Mumford Brewing, sure does – but it wasn’t easy getting started.

It was late 2015, just a few months after opening the Mumford taproom in Downtown LA. “It was difficult at first for us,” he told me recently, sitting in that taproom, where there are still six New England IPAs on draft. “Because we had just started and the budget was still a little tight.” 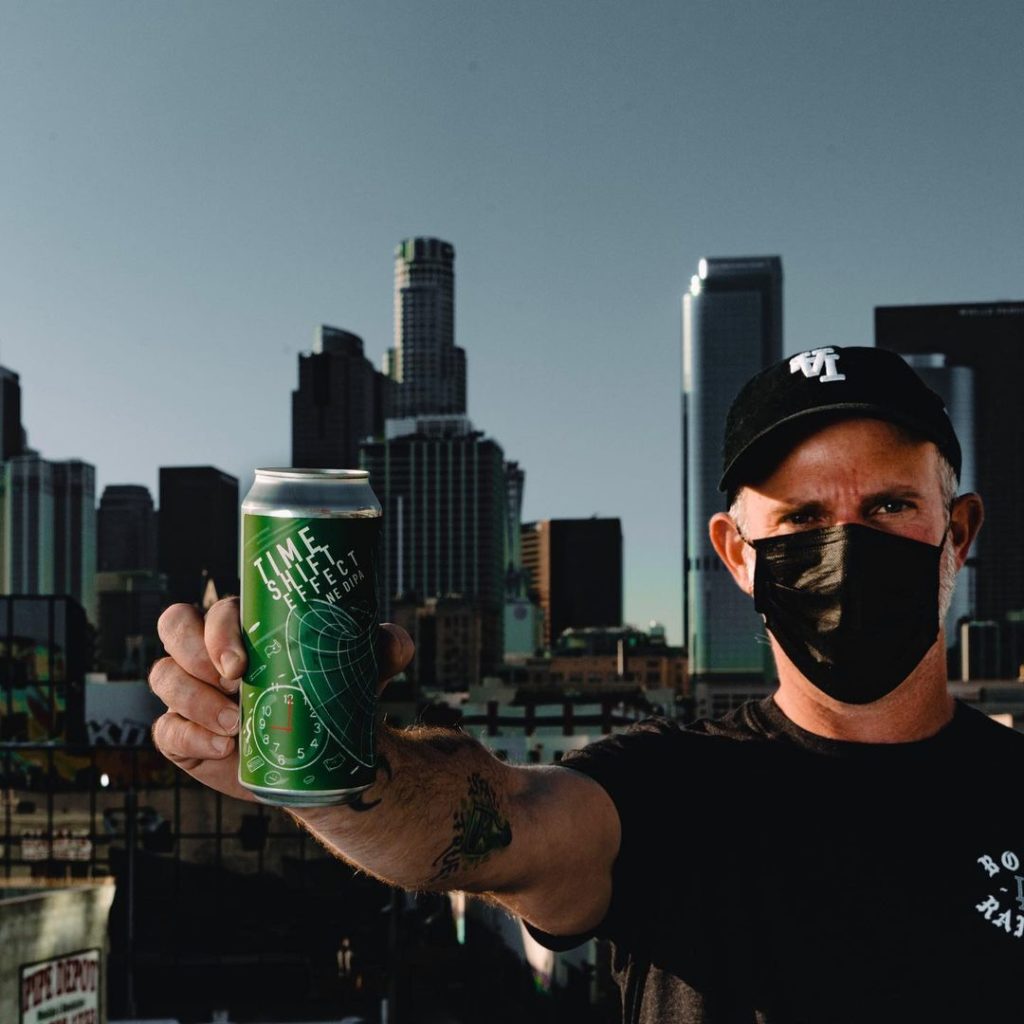 It’s hard to believe now, when launching with a hazy is a near-prerequisite for opening a craft brewery, but at the time, there was a financial question. Making a hazy IPA requires a massive amount of hops to be dumped in at the end of fermentation, which, for a young brewery, is an expensive investment.

“It’s a hard sell for pitching my partner’s like, ‘Hey, I want to do this new beer style. I don’t know if it’s gonna work out,’” Mumford said.

It worked out. Soon, Mumford Brewing had lines out the door on can release days: local beer drinkers clamoring for this new-to-LA style of hazy, juicy, aromatic brews.

Julian Shrago, owner and brewmaster at Beachwood Brewing, remembers the first time he brewed a Hazy for a different reason. As a homebrewer in Southern California through the ‘90s, West Coast IPA ruled supreme.

“At first, being somebody who is more drawn to classic, established styles, I kind of resisted [Hazy IPAs]. I didn’t understand the style,” Shrago told me.

“When we did it, it was ultimately driven by a popular request,” he said. “And finally, I had to surrender my ego and realize they’re not asking us to brew this because they want us to jump on some kind of bandwagon. They’re asking us to brew this because they think we’ll be good at it. And we owe it to our fans to take a stab at this.” What he and his team created, ultimately, was 28 Haze Later, their juicy, crushable flagship hazy, which they still brew continuously. 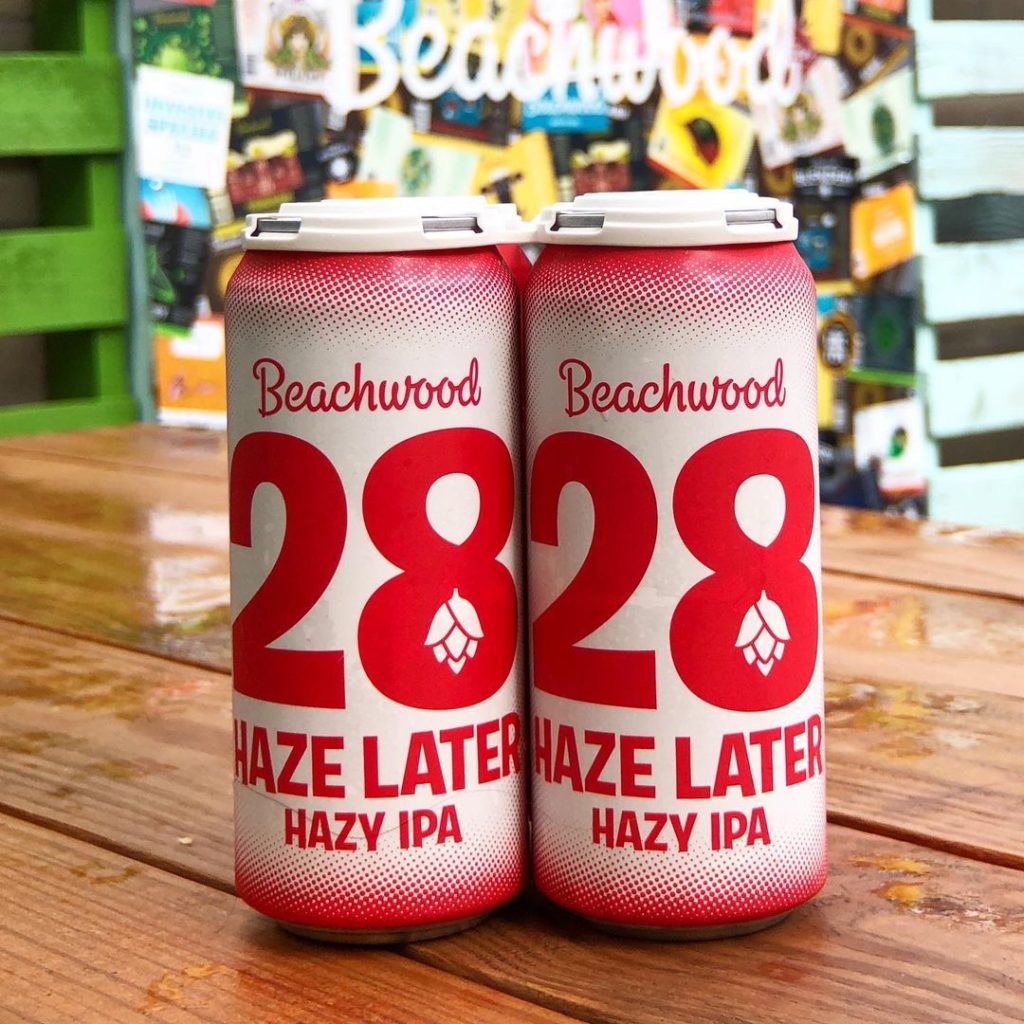 Why did the style become so popular? Beer trading and the internet played a big part of it. But it was also something completely different than most folks had seen before. Beer drinkers who balked at the almost prohibitively piney, bitter West Coast IPAs found something much more accessible in the soft-mouthfeel, aromatic and juicy hoppiness in New Englands.

“Hazy IPA introduced people to new ideas about what beer can be,” Shrago said. “The appeal [in the style] is that people probably thought that they didn’t like hops – but maybe it’s just that they didn’t like really hoppy beers, or they didn’t like the way hops might have been incorporated. And hazy IPAs have shown that you can use an abundance of hops and get a lot of hop flavor and aroma, without necessarily a lot of bitterness.”

The New England IPA craze has burned hot, and bright, and, for all intents and purposes, is still going. The biggest craft breweries in the country all have year-round flagship iterations of hazies. Virtually every brewery in LA makes their own version – Mumford’s made more than 100 since opening; Monkish Brewing in Torrance has released more than 300 differently-named New England IPAs.

Mumford uses New England IPA. Their reasoning? “It’s principled after [New England breweries’] styles, so you gotta call what their style is,” Mumford said. Most people – me included – use them interchangeably.

Ironically, though they’re commonly called Hazy IPAs, appearance is less critical than other factors when categorizing the beer. In practice, New England IPAs could be as translucent as a blonde, or utterly opaque as a stout. 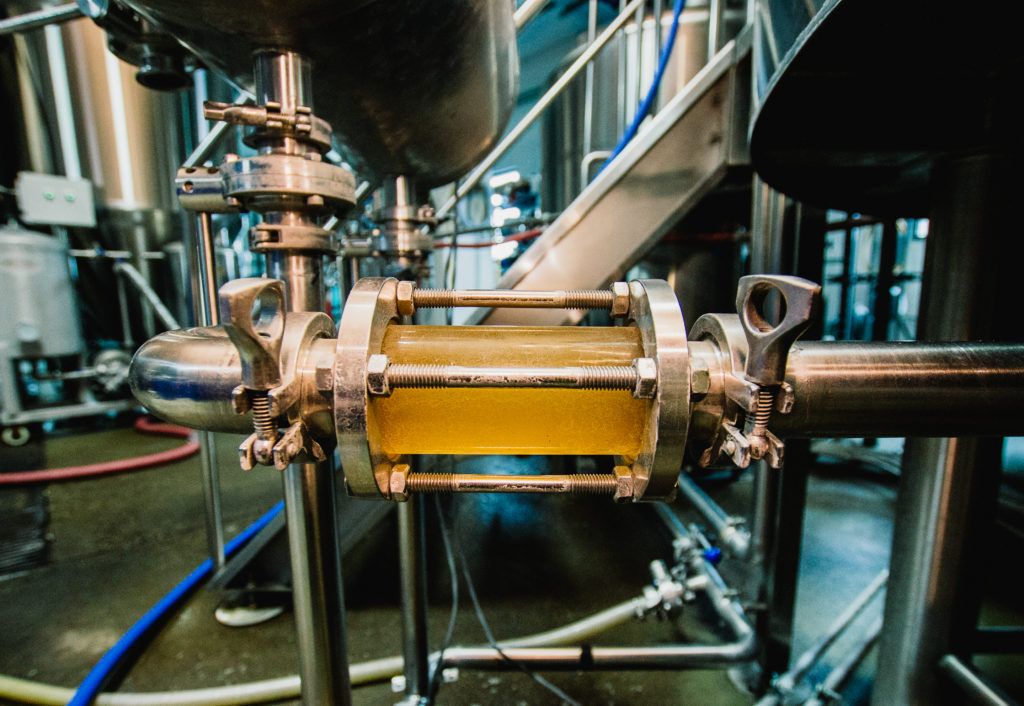 But there are certain things everyone agrees on about the style, which is all about mouthfeel and aroma. This is how Shrago sums a good New England IPA:

“I think of something very full-bodied – something with a soft mouthfeel, with lots of fruity hop flavors and aromas. But not a lot of bitterness, especially compared to its West Coast counterpart,” he said. “The mouthfeel is heavier, silkier, maybe even more emphasis on aroma than even West Coast IPA.”

Achieving the soft, silky mouthfeel – almost like biting into a ripe peach – starts with plenty of high protein grains, which boost the silkiness in the body of the beer. Another critical component is high-chloride (saltier) water – all of the LA-based brewers I talked to treat their water with calcium chloride, which brings out the sweetness of the malt.

The hops are also critical. The focus here is dry-hopping, meaning adding hops late in the fermentation process – or even right before bottling. The goal is to draw out those fruity and juicy aromas, without adding a lot of hop bitterness.

Some brewers experiment a lot with different hops – Mumford, for example, just made a fantastic New England Double called “Always Above” with only space-themed hop names “just for fun.”

Shrago says that 28 Haze Later has always been some combination of Mosaic, Citra and Galaxy. “It’s a super classic hazy combo,” he said. “When we first brewed that beer it was like ‘OK, yeah, this is The Combo.’ … For sure it’s the classic Trinity for me.”

All of that is what goes into making a good Hazy IPA – but consumers of the beer also have to worry about maintaining quality in the beer. Waiting too long to drink a Hazy is the cardinal sin of this style of beer, which is uniquely prone to oxidation.

“Please don’t sit on this for two months,” Mumford said about his New England IPAs. “Because then, when you drink it, you’re just missing everything.”

The first hazy IPA to really pierce public awareness was Heady Topper, brewed in 2004 at The Alchemist brewery in Waterbury, Vermont. Though Heady is now more extensively distributed, there was a time when it was only available at the brewery’s original brewpub. In fact, it was once so highly sought-after that customers would sneak into the bathroom to pour their pint glasses into bottles. Until 2011, you couldn’t even get the beer outside of The Alchemist’s brewery. 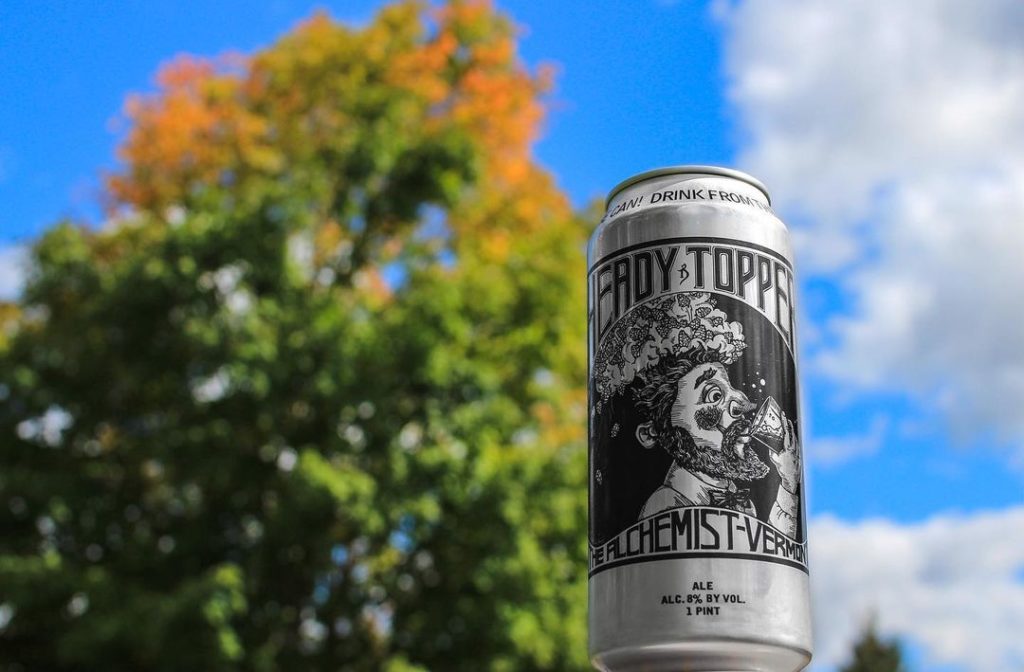 Not coincidentally, the rise in popularity of New England IPAs occurred alongside the emergence of online beer forums like Beer Advocate, Untappd, and r/CraftBeer on Reddit in the early and mid ’10s. But officially, the style is even younger than that – the Brewers Association Beer Guidelines didn’t include hazy, juicy, or New England IPAs as a distinct style until 2018, three years after the first New England IPAs were available in Los Angeles, and more than a decade and a half after it first hit the tap lines at The Alchemist Brewpub.

In LA – though this is a point of contention, as many breweries claim to have started making Hazies around the same time – Mumford and Monkish were the earliest propagators of the style, starting in 2015.

At the time, fans of more traditional styles didn’t understand the beer. Mumford says other brewers called the style lazy, because the beer is unfiltered.

He remembers one customer, in particular, who came in to Mumford and ordered a New England IPA, and didn’t even take a sip before demanding to see the brewer. “Where’s the brewer?” Mumford remembers the man saying. “This beer is unfinished, right? It’s not IPA. Look, it’s a hefeweizen! Look at this!”

At the same time, those beer forums were starting to explode, with fans of the style posting photos of their pick-ups from early adopters like Hill Farmstead in Vermont, Tree House in Massachusetts, and Monkish and Mumford.

As demand skyrocketed, some brewers were doing some really whacky stuff, clamoring to figure out how to make a proper hazy. Mumford remembers hearing about other breweries sending very specific instructions along with their kegs: “When people were first doing it, they were telling their distributor, their bars, that you have to store kegs upside down. And then once you’re ready to tap it, you flip them over.” If that’s how you’re getting haze, you’re not making it right.

Now, all major breweries have cracked the style. New England IPAs are literally everywhere. Sierra Nevada has “Hazy Little Thing.” Firestone Walker has “Mind Haze.” There’s Samuel Adams’ “Wicked Hazy,” Bell’s “Official Hazy,” and Lagunitas’ “Hazy Wonder.” None of these beers existed five years ago. Today, you can walk into a 7-Eleven and buy one; it’s a far cry from sneaking into the bathroom of a Vermont brewpub to self-bottle your own.

When I was talking to Shrago at Beachwood’s Long Beach brewpub, they actually only had one Hazy on tap – they did, however, have eight other IPAs on draft, all of them West Coasts. But even those more traditional IPA styles have been changed by the haze craze.

“There’s been a little bit of crosstalk between the two,” Shrago said. “Hazy IPA has shown even heavily West Coast breweries that you can increase hop aroma and hop flavor without necessarily increasing bitterness at the same time.” This has certainly been true at his own brewery, he said. “Some of Beachwood’s newest West Coast IPAs emphasize more hop flavor and hop aroma than they do bitterness.”

One example is Steely Jam, a new collab Beachwood made with Urban Roots Brewery in Sacramento. “It’s a West Coast IPA, but it does take some cues, it does take inspiration from New England IPA in that we shifted some of those hops from the bittering side toward the aroma side.”

“What I hope is that, since you’ve got some of these heritage breweries… producing very popular hazy IPAs, I hope that piques people’s curiosity,” Shrago said. “I hope that people get turned on some of those original foundational styles that when they were first introduced were groundbreaking.”

But both Mumford and Shrago have been running breweries for a long time. They both mentioned beer trends that they’ve seen come and go, and Hazy IPA is different.

“Hazy IPA is not going away,” Shrago said. “It has a permanent seat at the table.”